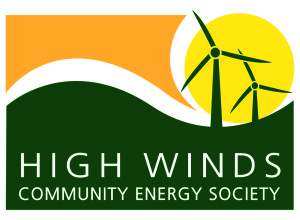 High Winds was setup to build new turbines on the Harlock Hill site following the decommissioning of the Baywind turbines.

In January 2015,  High Winds a Society for the Benefit of the Community, raised  £3.9m  to build two new high powered turbines on the Harlock Hill site, near Ulverston, Cumbria. The turbines were constructed in early 2016 and started generating in Summer 2016.

Further information can be obtained from the High Winds website

ENERGY4ALL
CO-OPS
Below are links to some of the other Co-ops in the Energy4all family: